Wheelie Pete's Roadhouse is both a fueling station and a restaurant. As it is said to serve Sunstone Sasparilla and is seen to serve pizza. A fuel station and tables for eating areas are set-up in the general vicinity of Wheelie Pete's.

While the Freewheelers were busy with the Shrouded Glade invasion, the menacing group known as the Skullz took over Rumble Ridge, along with the Roadhouse. The Freewheelers later retrieved it upon completion of the Enter the Rumbledome Quest.

During The Rumbledome Battle, the Announcer states that a Rumbledome Gladiator named Bronzeknuckles came stumbling from Wheelie Pete's prior to the battle.

According to Ironteeth's Wanted Poster, Ironteeth is wanted KO'd or alive for fighting at Wheelie Pete's. 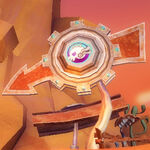 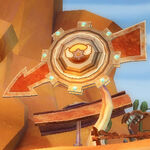 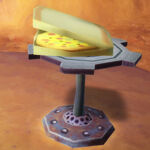 Pizza on a table outside of Wheelie Pete's. 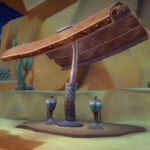 A fuel station outside of Wheelie Pete's.
Add a photo to this gallery

Retrieved from "https://freerealms.fandom.com/wiki/Wheelie_Pete%27s_Roadhouse?oldid=33005"
Community content is available under CC-BY-SA unless otherwise noted.