Warpstones are large, floating stones that allow the player to teleport to a location at any time from anywhere in the Free Realms world. There is a Warpstone in each major city and also in the smaller towns and areas.

Warpstones must be activated before it can be used at will. To activate a Warpstone, the player must either be near enough to activate it, or double-click on it. Once activated, the player can use the Atlas to teleport to that Warpstone at any time from anywhere. 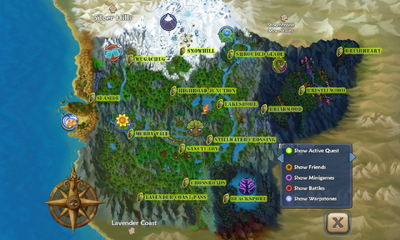 Retrieved from "https://freerealms.fandom.com/wiki/Warpstones?oldid=42465"
Community content is available under CC-BY-SA unless otherwise noted.