The Sunset of Free Realms is an official term used by Sony Online Entertainment representatives when referring to the closure of Free Realms on March 31, 2014 at 6:00 PM pacific time, 7:00 Mountain time, 8:00 Central time, and 9:00 Eastern time.

On January 24, 2014, an article by Free Realms Producer Steve "Shock" George was released over the official Free Realms website announcing the closure of Free Realms[1], later reposted on the official forums and official wiki. Along with Free Realms, closure was announced for three other Sony Online Entertainment massively multiplayer online games including: Clone Wars Adventures, Vanguard: Saga of Heroes, and Wizardry Online.

Reasons for closure of the game were given by SOE's President, John Smedley, over Reddit.com. It was not a big cost issue, but more of an issue with the amount of time it required to maintain the code bases when updating authentication or security updates,[2] and that the resources were needed elsewhere.[3] Along with SOE will no longer be developing games exclusively aimed towards children.[4]

Is Free Realms being shut down?

Will the Free Realms Website and/or Forums be available after the service shuts down?

All Websites and Forums associated with Free Realms will be removed after the service shuts down.

What’s going to happen to my Free Realms items and trading cards?

What happens to all the Station Cash I have purchased?

Your Station Cash resides in your SOE Wallet which is shared across all of the SOE games. You can continue to use Station Cash to purchase items in other SOE games (with your parent’s permission.)

I have a further concern and want to contact Customer Service. How do I do that?

We definitely want to help address any further concerns, and if there is some specific issue with your situation that isn’t covered but could be answered by Customer Service please follow the directions on this page. You are also welcome to post any general questions in this thread; we will be reviewing it frequently. 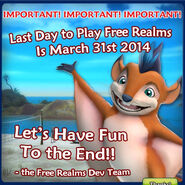 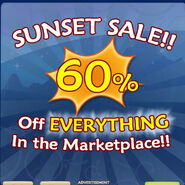 Retrieved from "https://freerealms.fandom.com/wiki/Sunset_of_Free_Realms?oldid=42908"
Community content is available under CC-BY-SA unless otherwise noted.