Robgoblins are small creatures that live primarily in camps with other Robgoblins. They have an affinity for destruction, explosives, magic and stealing.

Robgoblins can also be found in Sunstone Valley, although there are several differences in these two cousins. Such include a red skin tone and a default occupation as Scrapsmith. There is a Scrapsmith camp just outside of the Hostile area controlled by these small creatures. 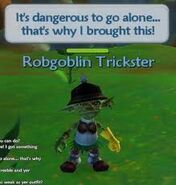 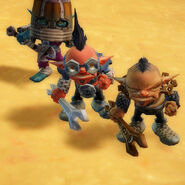 Wizard Robgoblin
Add a photo to this gallery
Retrieved from "https://freerealms.fandom.com/wiki/Robgoblins?oldid=40837"
Community content is available under CC-BY-SA unless otherwise noted.