Start a Wiki
The Regal Princess Hat is a Girls Only, Freestyle Jobs, head slot, clothing item that is available exclusively to female avatars for purchase through the Station Cash Marketplace at the regular price of

In appearance, the Regal Princess Hat is a variation of the Pretty Princess Hat, a Virtual Reward from the Physical Trading Card Game set. 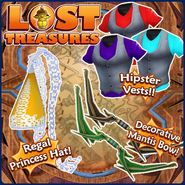 Retrieved from "https://freerealms.fandom.com/wiki/Regal_Princess_Hat?oldid=37810"
Community content is available under CC-BY-SA unless otherwise noted.