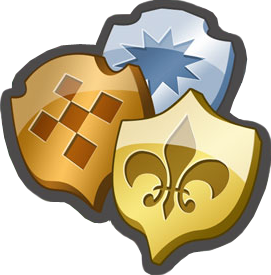 Master the stealth moves of a Ninja while you take on Yetis, cook up useful potions and foods as a Chef, compete against your friends as a Kart Driver and more...all in one day! Try out tons of jobs, and switch back and forth at the drop of a hat! By completing quests, jumping into combat or playing fun mini-games, you will level up your job. As you gain levels, you will begin to unlock exciting new abilities, quests, weapons and even cooler job outfits.The maximum of a job's level is 20 (level 4 if you are not a member for most jobs). [1]

Freestyle jobs are, for the most part, quest driven jobs. Experience is gained by completing quests, playing mini-games, or exploring.

Crafting jobs allow you to create items using ingredients bought from vendors or harvested in the world. Experience is gained by completing job specific quests and playing Mini-Games .

Combat jobs will allow you to battle with some of the less friendly inhabitants of the world. Experience is gained by completing job specific quests and by battling in combat instances in the wilds and in dungeons. Combat jobs also spend Stars to improve their abilities.

To gain access to a profession, you must first unlock the job. Most jobs unlock by simply talking to a basic trainer for that profession. Most jobs have multiple basic trainers in locations all over the world.

Some jobs, such as Postman, have an introduction quest that is given to you by interacting with an object (ie. postboxes), which will then lead you to the trainer.

Most jobs cannot be unlocked until meeting a requirement (experiencing another job type first or having a membership after level 4). Since the Sunstone Valley expansion was released, the Blacksmith, Brawler, and Miner job levels have been increased to 20.

A few objects (mostly Mini-Games ) within the world will activate a quest if you have not already unlocked the job associated with it. The quest will direct you to the nearest trainer that unlocks that job.

Job Statistics effect how a character performs in some of the job related mini-games. Stats can be increased as a job's level increases or through related clothing, weapons, tools, accessories, and shards that have stat bonuses. Any job related items that have a bonus will be shown at the bottom of the item's tool tip.

Job Statistics can be found in the "About Me" section of the Job window.

Energy: Increases the maximum amount of energy available for abilities

Attack: Increases the amount of damage inflicted when attacking

Defense: Decreases the amount of damage received when attacked

Matcher's Skill: Increases chances of matching tiles spawning alongside each other during "match 3" mini-games

Retrieved from "https://freerealms.fandom.com/wiki/Jobs?oldid=43492"
Community content is available under CC-BY-SA unless otherwise noted.