Start a Wiki
The Hipster Pants are a Freestyle Jobs, legs slot, clothing item that are available to everyone through the Station Cash Marketplace at the regular price of

The Hipster Pants were introduced in-game on November 19, 2013 as a part of Lost Treasures Month.

In appearance, the Hipster Pants are a variation of the Rocker Pants, a Virtual Reward from the Physical Trading Card Game set. 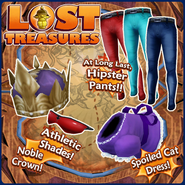 Retrieved from "https://freerealms.fandom.com/wiki/Hipster_Pants?oldid=35477"
Community content is available under CC-BY-SA unless otherwise noted.