Gus Geargrinder was a tough biker Dwarf NPC from Sunstone Valley. Gus was the leader of the famous Sunstone Valley Dwarven Biker gang known as the Freewheelers. Gus had sacrificed himself in order to defeat the Gloam that terrorized Shrouded Glade during the Shrouded Glade Invasion. His brother, Dorn Geargrinder, became his successor and took leadership of the Freewheelers.

A statue was built in honour of Gus Geargrinder's bravery on the Druid Academy's campus located in Shrouded Glade. 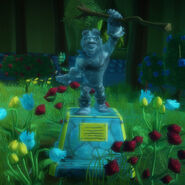 Statue located on the Druid Academy Campus
Add a photo to this gallery
Retrieved from "https://freerealms.fandom.com/wiki/Gus_Geargrinder?oldid=29696"
Community content is available under CC-BY-SA unless otherwise noted.