The Chrome Drake is said to have been constructed by Junkmaker Jort.

The Chrome Feathered Drake is a Virtual Reward loot card from the Trading Card Game Series 5 set. Once redeemed, one Chrome Drake ride is received through the redeeming player's communicator. The card's ID is 5L1. 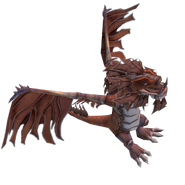 Promotional image
Add a photo to this gallery

Retrieved from "https://freerealms.fandom.com/wiki/Chrome_Drake?oldid=37910"
Community content is available under CC-BY-SA unless otherwise noted.