Baby Black Widows are known as Hatchlings, and often appear spawning out of eggs in the dungeon instances Arachnia's Lair and Haunted Mines. Male Black Widows tend to have smooth legs and two fangs; while the female Black Widows have hairy legs, four fangs, and a spike at the end of their abdomen.

There are currently no known Black Widow sub-races at this point.

Black Widows may be found in the following places:

A list of named black widows who can be interacted with one way or another. 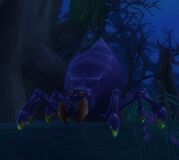 Black Widow Eggs
Add a photo to this gallery
Retrieved from "https://freerealms.fandom.com/wiki/Black_Widow?oldid=22862"
Community content is available under CC-BY-SA unless otherwise noted.