The Abominable Snowman was an enemy NPC boss featured as the main antagonist of the Snow Days event.

It is located in Snowhill, and can be defeated with anti-snowmen snowballs. After defeating it, a treasure chest appears that gives you a random christmas gift. It is possible to become one after eating a cake that you can get during the Birthday Events, called the "Boss Cake." 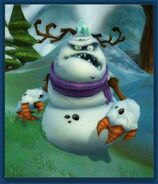 Retrieved from "https://freerealms.fandom.com/wiki/Abominable_Snowman?oldid=38610"
Community content is available under CC-BY-SA unless otherwise noted.